So, Supposedly I was in a Rut?

on March 27, 2011
I don't think I was in a rut persay.  I think it was a mental rut.  And yeah, that moan about "30/30 not improving me" was also a load of crap.  I mean, evidently there was a ton of bullshit this morning (maybe the entire month) and I think yesterday might have helped me move on from it.

Today, the husband was gone and I just didn't want to sleep (again).  I pushed everything out again. 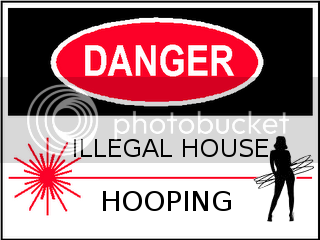 I have been meaning to put in the hoopnotica DVD again.  So, I pulled it out.  I popped it in and I skipped waist hooping and went straight to hip hooping.  Now I've been doing it but I haven't really had a reason/keep it going/etc.  It's all about intention.  I kept it going, started to move with it.  I started to practice rolling it up and down and rolling up and down.  I eventually started to talk to my hoop.
"We're going up." *pause*
"Down."  *pause.*  "I said down.  Now, go down. Good!"

Next was the passing and floats.  I still don't get the float.  I tried for a minute and then, just went back to hip hoop practice.  Next, I tried more varieties of corkscrews.  I had been experimenting with the scoop anyways, but today started to corkscrew down with second hand.  I lost control for a moment and smacked John's computer. Uh oh.  Not broken, so it's cool!  I popped in the next video which started with more corkscrew variation and whatever else there was.  Next was chest hooping.  I don't really have it completely down yet but I am a bit closer than I was.  I started to spin and I wobbly had it while spinning.  Yay!

So, yeah, that whole rut crap was...crap.  I still need to focus on moving and waist hooping more but I'm getting somewhere now.  Or I've had it in me and I didn't realize it.  This is enough of a confidence builder that it's awesome.  Although I think the best way to start getting the whole dancing thing is utilizing Betty Hoop's DVD.  I'll have a review on another day.  Definitely it's a must buy for any skill level!

PS!  He said that if I clean out the back bedroom, I might be able to at least play with my minis in that room. ^_^  And if I have the room (and door shut), no one will know if I hoop with my big hoops either. ;)
30/30 hoop DVD hoop love hoopnotica learning new tricks