on August 17, 2011
Or maybe it's Flow Camp withdrawal.  I don't know.  I don't have a hooping best friend (meaning people I can drag to Hoop Path in Louisville or Flow Camp, whatever).  I am getting new friends because of hooping.  I'm so thankful for that because these people are amazing.  I can't take John to any event where I may be able to bring my hoop.  He doesn't even care to watch.  At the same time, I'm feeling lonely and lost in my hoop.  I don't know what else to do inside my hoop and I feel like I'm on a constant hoop loop.  I tried to hoop out some aggression today and I didn't know what to do.  I felt lost.  I tried to do a move that I thought I had learned at Flow Camp, but I can't do it.  My current hoop loop is vortex, waist, shimmy up, CHEST HOOPIN MFERS, vortex, maybe some passing/helicopter, VORTEXXXXXXX.  I get bored at the waist.  I love chest hooping so much. I could do it all day almost.  Although I seem to only do the same 4 moves no matter what.  I can't even do vertical waist up because it bounces to my chest. I don't know why either. 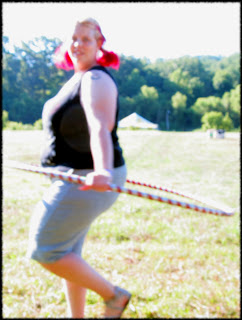 What I've like about poi is that while I practice, I can stay in the house and talk to John. Whereas with the hoop, I have to go outside.  I've even hoped deep down that he'd come out and watch me.  Nothing. I've tried to do what Paige's suggests and find some aspect that he wouldn't mind as bad.  I even suggested that he should be my safety.  I mean, he hates fire and always worries about me.  Then, wouldn't he feel better if he could make sure that nothing happens?  He'd be like my ultimate knight in shining armor.  I'm letting him think about it. Maybe that might help. I forget that he needs time to ponder.  By the time I'm ready to mention something, I'm ready but he still needs process time.  And honestly I didn't expect to spin fire at Paige's.  He wasn't ready for the idea of spinning fire.  Or ever.  The only time he's admitted that he doesn't mind the hoop was during a long fight when he finally admitted that he didn't mind watching me.  I'm not asking him to make comments every time I hoop but I'd like a comment at one point.  You know, "Hey, you have gotten better" or "That looks hard. Good job."  Or even "I'm proud of you."

Is it possible that with the (here comes the random metaphysical crap) amazing hoopers around me at Flow Camp and the vibe that was flowing that I was able to do moves that I had never even attempted to learn before?  Am I crazy?  I really liked that move (vertical chest hooping, arms down).  I did it the next day with ease but once I got home, I couldn't do it.  I thought it was fatigue.  Nope.  I tried yesterday morning.  Now eventually I did get very shaky move down but not the flow I had.  Sadness enveloped me as I just went back to the same flow I have been doing for months. I want a new move to invigorate my hooping practice again.  Or maybe I need to refind the moves that I rarely do.  I've not done a chest roll or palm spin in quite a while.  I think I've lost my nice chest roll from no practice.

I know I've said before that I'm ready to go down in my hoop but I don't think so.  If I went smaller, I wouldn't be able to comfortably stand in one spot and hoop.  I'd really have to spin to get a move.  Although I want to go smaller but I'm not sure if I'm ready.  I also get very bored waist hooping and I cannot for the life of me walk while hooping.  Shouldn't waist hooping be a good base on being a good hooper?  I can't even hip hoop on my reception hoop.


I guess I'm in the hooping dumps? Even though I am in the hooping dumps, I still move to music with the same flow I have since I started to hoop.  I look forward to hooping when I get off at work.  Once I start, it's like, oh.  The music around me doesn't inspire me.  I can't find headphones to use my MP3 player.  Either way, I'm getting sick of that music, too.  The only thing that can blast is an old CD player/radio.  If I were to find music online, I'd have to burn it.  Anyone have some great mixes and hooping music?  I loved most of the music at Flow Camp (and Paige tends to have some  rockin' music at her house).  I love the dubsteppy goodness at times.

Maybe in someway, it is Flow Camp withdrawal. I wouldn't have realized I was this lonely until after experiencing what it is like to have such amazing, talented people around me.


Edit: Someone was defending John over this blog post.  Which I think is crazy because I've been hooping for six months which is a whole lot longer than John's been in neck pain or since we've moved.  And that one time I had hoped that he'd come out and watch me, he could have rested in a chair under our brand new porch.  Instead he watched Star Trek Voyager.  Also, this post isn't just about him.  It's about a lot of different things.  Music, un-inspiration, and just being lonely in the hoop.
hoop advice hoop drama