Never Cheap Out on Fire Hoops 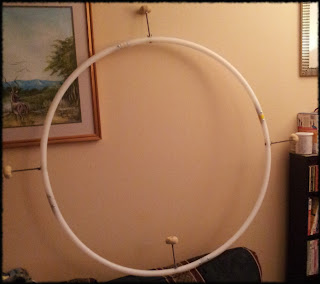 Remember a few months ago that I bought a bearclaw fire hoop?  It was one of the cheapest hoops I could get that were collapsible with removable wicks.  Bearclaw also frequents the Hoopcity forums which made me think, "they must really care about fire dancing."  When I first got the hoop, it was cold and one of the sections would not snap tight.  I'm not an idiot.  I have plenty of snap connecting hoops.  I waited till it became room temperature (thinking it was the temperature changes) and it still had issues.

Last night I finally got to burn it.  To calm my fears, I put gaffer on each connection.  Although I don't think I put gaffer well on one connection.  Having your own hoop versus using someone else's hoop is so different.  I pretty much waist hooped the entire time.  I was so scared that my boobs was going to catch in flames.  It seemed like one fire on a wick was so much larger.  After talking to Paige, I lit it again and tried again.  I was starting to rock it out.  I was doing helicopter and what not.  I think I had just put it on my waist and it snapped apart.  It went flying into the grass. I panicked.  I asked Paige to help me and we were going to put it out.  As we were putting it out, on one of the extinguished wicks, my hand grazed the spine and all of the sudden I realized I was burnt.  I honestly believe that this would not have happened if I had a better hoop that wouldn't snap apart midspin to cause me to have to extinguish it like that.  I mean yes, accidents happen but still.

I might write an irate email to them although I've been too busy to do anything really other than work and sleep and Hooping Idol stuff.  I did remind her that I had her quick wicks.  The story with the wicks is I ordered the wrong size.  I ordered 1/2" instead of 3/4".    Since there's a restock fee, we decided when she is able, I'll give her the ones I currently have and she'll order my correct size.  Although that's been a few months. More like 8 but I understand it's a stressful time!

Here is the video though

And I might start doing a blogging series on my hooping idol videos.  What do you think about that?  It would cover what I was trying to do and what I wish could have happened.