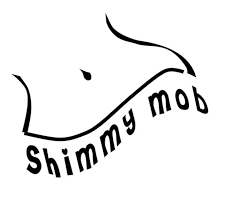 Obviously, I've been on a bellydance kick lately.  Recently I joined the Shimmy Mob.

"Our primary objective is to raise donations and awareness. Funds raised via Shimmy Mob will be donated to Abused Women and Children shelters throughout the world.

Our secondary objective is to produce a flash mob type event formed by dancers and non dancers with the objective of performing a choreographed medley of bellydance styles."
It has been a lot of fun so far!  I went to the first rehearsal this week and it was a hoot.  Of course, actually working on choreography was hard.  I can have a move down pat when I'm drilling but walking, stop, do that movenownownow! is really hard for me.  You don't have to be an experienced bellydancer to participate.  There are beginner and intermediate variations of moves.  There are multiple cities holding a Shimmy Mob.  Check the website to see if you have one near you!
I'm hoping to be able to take another six week class after the one I'm participating in is over.  It looks great.  Drilling one move during a whole class!

And did I tell you?  I'M GOING TO KINETIC FIRE! Weeeeeeeeee!
bellydance hoop festivals kinetic