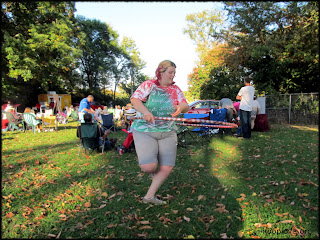 Months ago I was offered to come to the Rock Fence Park concert series finale.  I took my hoops and scouted out a spot out to the side.  John took Max and "tried" to enjoy the music.  It was really awful music.  There were high schoolers that was also singing at the event.  At first I had a few children come up and hoop.  I tried to hand out a few fliers for my indoor hoop jam (which was a bust).  After the high schoolers were done singing, they came over and hooped with me. I'm sure they thought I was odd. 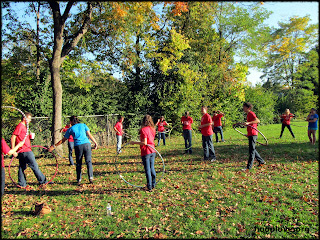 John's best friend came over and let me teach her how.  I only worked with her for a few minutes and she was able to waist hoop.  She was thrilled.  She kept asking me why I wasn't on the stage.  I almost crept over when it was over.  I was also not pleased about the fact that they didn't introduce me.  I probably was looking like the crazy girl with the hoop.  Also, the Jessamine Journal did not take a picture of me but of the little kids.  Even Lois' was ticked off about it.  She just wanted me on the stage hooping away.

I know I'm writing about this now because obviously I never did when it was appropriate.  The biggest reason is because I somehow got to talking about the book, Hooping.  I expressed my disdain for the book.  I'm sorry but the tone of voice throughout irks me.  Even a friend at work agreed.  Somehow that started to get Lois on a flurry to get hooping in this area.  She starts telling me about places I need to contact and articles I need to write for hooping.  She was so excited. 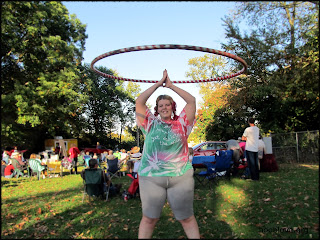 I'll be honest.  After my last hoop jam was a bust.  Every hoop jam I have either gets weather-ed out or no shows.  On the other hand, I decided to email at the FCCLA teachers in the region.  I know FCCLA has a Student Body national program.  I offered to teach a hooping class.  Only one emailed me back and she said she'd ask the members on November 2nd.  I didn't hear anything back.  I know creating a community is not an easy thing but I feel like I can't get ahead.  It's been frustrating me deep down.

Lois' plan for the hooping thing is to get me published to legitimize what I'm doing, go to the school's for PE classes, and I can't remember what else she was saying.  I emailed the FCCLA adviser to check on how the meeting went as an update.  Lois knows exactly which teachers are lazy enough to loooove a "free" day.  Talking to Lois also helped me figure out why only one messaged me back.  Evidently there are no CTSOs in the schools anymore.  That upsets me so much because I don't think I could have became a state officer if it was merging both schools.  That's why the Lexington schools hardly had any big FCCLA attendance.

So, hopefully, this will help me out.
community hoop jam hoop teaching